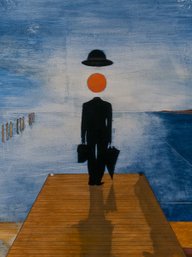 Born in Brussels in the post-war baby boom, Christian Satin settled in the city of Liège in 1956. As a nine year old, he began painting with oil on canvas. His first studies borrowed impressionist techniques, he briefly went through a cubist period, before resolutely turning towards surrealism.

It was as a “teenager”, a fashionable Americanism in the sixties in Belgium, that Christian Satin started to exhibit his paintings.

In 1966, an exhibition at the Gallery Piranèse, directed by Denyse Willem, grouped together four young and upcoming artists from the Academy of Fine Arts in Liège. It was Fernand Flausch's first exhibition, and Christian Satin’s last.

And so began Christian Satin’s long absence from the world of painting .

The reasons for abandoning painting included André Breton’s death as this seemed to mark the end of the surrealist movement.

Nevertheless, Christian Satin was and remains convinced that surrealism endures. From Hieronymus Bosch to Félicien Rops and René Magritte, there have been many approaches that fit into his definition of surrealism. Surrealism is a state of mind which continues throughout the centuries, particularly in Belgium.

After nearly 50 years spent without touching a tube of paint or a paintbrush, Christian Satin finally re-entered the world of surrealism in 2012, giving it a new form which he calls trans-realism.

For Christian Satin, trans-realism, like surrealism, comes from a desire to express immersive situations and images which blur the boundaries between the real and the imaginary.

He creates an alternative “other reality”, where, in his trans-realist triptychs, he inserts scenes into a collection of contextual works, interrupting the coherence between the past, present and future.

This vision flows from the current perception of the world at the heart of a universe, where the reality of apparent experience is integrated into space-time; a theatre of apparently chance transformations in the cosmos, and our singular and precarious perception of the quotidian.

Similarly, the universe and evolution impose their superior changes onto the potential and imaginative capacity of the brain.

Added to the poetic perception of trans-realism is the link between reality and myth; erasing the difference between certainty and ambiguity.

The triptychs painted by Christian Satin incorporate these concepts in an innovative way; even if they already existed before throughout the period spanning from Hieronymus Bosch to the surrealists of the 20th century.  Trans-realism is better suited to the works produced at the start of the 21st century, in contrast with surrealism which characterises the period 1919-1969.

Christian Satin believes that at the start of the 21st century, after attempts to make a clean break from everything, including the notion of “beauty”, many people aspired to express concepts in a harmonious way, addressing sensitivity as much as the mind.

It’s this route that the artist wants to explore by producing paintings in the form of triptychs, where the outer wings resemble a book cover, allowing the viewer to open it and discover its content, according to their imagination at the time.

Everyone, author and viewer, will thus make their own personal contribution to the construction of a “greater reality.”

Personal exhibitions were held in 2014 at the Venta Gallery in Liège, in addition to a group exhibition at the Expo Tempo Gallery in Knokke.

In February-March 2015, the town of Liège and the Wallonia-Brussels Federation set up a retrospective exhibition at the Museum “le Grand Curtius” entitled: “Christian Satin, Painter and Architect.”

For 45 years, from the end of the 1960s to the beginning of this century, Christian Satin was better known as an architect and Professor.

A Professor for about thirty years, many young architects attended his classes on materials technology and construction. He was then elected by the people of Liège to become the President of the Order of Architects and Head of the Walloon Chamber for ten years.

In 1973, Christian Satin established the office of architecture AGE ENGINEERING SA and subsequently managed it. He participated in competitions by collaborating with architects such as Jean Nouvel, Kengo Kuma, Architecture Studio, 24H Architecture…

Amongst his accomplishments is “Le Vertbois,” where his use of red paint for the facades was vilified and harshly criticised at the start of the 1990s.

Since then, this colour has made a number of appearances in Wallonia, to the point of becoming a “classic” when it was used by the same architects, Lesage and Satin, on the facades of Palais Curtius.

Photos and plans of some of the buildings designed between 1973 and 2012 were exhibited in 2015 at the time of the “Christian Satin Painter and Architect” retrospective at the Grand Curtius; notably old listed buildings which had been restored and renovated, as well as contemporary apartment blocks.

The Urban Planning Prize of Liège was awarded in 1991 for the building Maréchal in Rue Cathédrale; and later in 2005 the building of the platform Ribuée was nominated for the award.

In 2003, the Walloon region chose the Saint Laurent farm in Anthisnes to represent the region at EUROPA NOSTRA.

During several stays in Senegal, Christian Satin, with his colleagues from the Lambert Lombard institute, undertook research for the restoration of the General Assembly of French West Africa in St Louis, classed as a World Heritage site.

In 1996, Christian Satin was awarded the title “Knight of the Crown” by His Majesty King Albert II.

After going down the route of classical humanities, when Christian Satin began studying architecture in 1965 and attended the Academy of Fine Arts in Liège, he decided to combine his passion for art and design with that of science and technology.

During his studies, between 1965 and 1967, he had the opportunity to undertake work and research in the field of polyester furniture, most notably with the designer Pierre Paulin. With this experience under his belt, Christian Satin designed several polyester seat models which were mass produced.

In 1968, the American firm Bus & Car, who principally manufacture Continental Trailways, appointed him to design a recreational car with polyester bodywork mounted on a Renault R4 platform. Renault Vilvoorde put it together in a small series destined for the American market. While testing was taking place for the approval of the vehicle, new safety standards were being prepared in the US. The project was abandoned after production of only a few dozen copies.